Smileys for your Gmail...

The black and white days of text-based emails have had their day. Following the evolutionary path blazed by colored labels, we present, in all their technicolor glory, emoticons in your mail.

No more will you have to settle for a ;) when you can have a

. Out with the "XOXO" and in with the

. And of course, when the bad news smells really bad,

and welcome in the colorful new world of Gmail

P.S. For those of you who love our chat smileys,
Google also added a whole new set for your enjoyment.

Source
Posted by AalsiPanda at 3:34 PM No comments:

Firefox Minefield browser to blow you out with speed

Mozilla has come out with what may be the future of firefox, the speed is quite fast and is visible. It’s a pre-release/alpha version of the Firefox browser. If you would spend some time with Minefield it is clear firefox is comming out with a faster and better browser.


Of course the question that pop’s up on everyone mind is how fast is it? I read claims that it is Most Fastest Browser in the World ever. So I decided to try it, Yes! it was quite fast.

You can get more information about the browser from Mozilla Page. You can also download the latest version from ftp of mozilla.org latest-trunk. Well if you have the time and the guts to try out a browser which is in ” NOT A FINAL OR PRE-RELEASE VERSION” yes this cup of tea is for you.

If you have a mac PC, Set your default browser as MineField, you will notice something. How many web browsers do you have on your system.

Source
Posted by AalsiPanda at 3:28 PM No comments:

SRIHARIKOTA: Chandrayaan-1, India's maiden moon spacecraft, was on Wednesday put into Transfer Orbit around the earth by the Polar Launch Vehicle


PSLV-C11 about 19 minutes after it blasted off from the Satish Dhawan Space Centre here. ( Watch )

The 1,380 kg Chandrayaan-1, carrying 11 payloads, was released into a Tansfer Orbit at a perigee (nearest point to earth) of about 250 km and apogee (farthest point from the earth) of about 23,000 km, 18.2 minutes after the PSLV-C11 blasted off as the scientists broke into jubilation at the mission control centre.

After a series of procedures over the next two weeks, the spacecraft would reach its desired Lunar orbit and placed at a height of 100 km from the Lunar surface, marking the operational phase of the mission which would put India in the elite lunar club.

Earlier, at the end of the 49-hour countdown, the 44.4 meter tall four-stage PSLV-11 lifted off from the second launch pad into a cloudy sky.

This is the 14th flight of ISRO's workhorse PSLV, which had launched 29 satellites into a variety of orbits since 1993, and 13th successive one in a row.

The Chandrayaan will take approximately 15 days to reach its intended lunar orbit where it will remain -- continuously mapping the lunar surface and sending back valuable data.It is also carrying 11 payloads, five entirely designed and developed in India, three from European Space Agency, one from Bulgaria and two from US, which would explore the Moon over the next two years.

Along with the scientifc instruments, the Chandrayaan also carries a symbolic Indian flag which is expected to detach from the craft and land on the moon.

Along with the scientifc instruments, the Chandrayaan also carries a symbolic Indian flag which is expected to detach from the craft and land on the moon.

Chandrayaan-1's path to the moon:

Posted by AalsiPanda at 4:20 PM No comments:

Furthermore, to ensure that only the right contacts are synced with your mobile device in the future, Gmail is moving previously auto-added contacts in 'My Contacts' back into 'Suggested Contacts'. Only contacts that you've moved to 'My Contacts', edited, imported or added to a group will remain in 'My Contacts' for syncing.

For more information:
http://mail.google.com/support/bin/topic.py?topic=12867
Posted by AalsiPanda at 4:14 PM No comments:

Mozilla released the Firefox for Mobile Alpha (codename Fennec) for users of the Nokia N810 and N800. Firefox is working on making it available to other mobiles in a few months.

You may download and install Fennec. If you do not have an N810, you can still experiment with Fennec by downloading Fennec for Windows, Mac OS X and Linux.

Whose turn is it to reply? Check out conversation view for scraps

Do you have so many scraps from your friends that it's sometimes tough to know which scraps go with which conversation? To help you keep track of your scraps, orkut now lets you follow any of the scraps in your or your friends' scrapbooks in a conversation view. Just click on the "view this conversation" link below any scrap that has been replied to, and you will see the back and forth scraping that you and your friends have shared. All replies are connected to the original scrap, so you can view them in sequence. 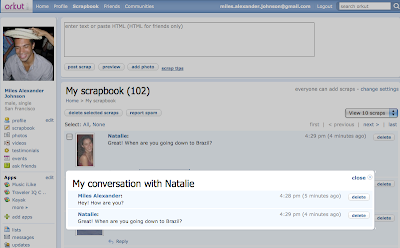 Source
Posted by AalsiPanda at 10:23 PM No comments:

Have you ever clicked on a link only to have it unveil an unfriendly "file not found" message? We know it's a bummer, so now Webmaster Tools offers site owners a way to help all of us click seamlessly through the web. 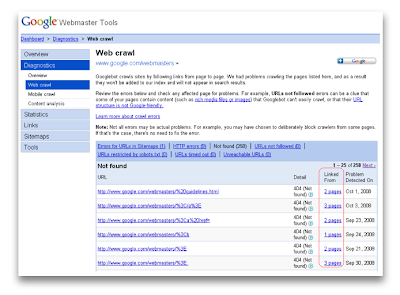 What about any "file not found" URLs that haven't yet been fixed? Let's improve that, too: Webmaster Tools provides site owners with the "file not found" widget, (aka the 404 widget). It's a small snippet of code that can change the message from this unfriendly one:

If you are considering buying a cheap Chinese phone, well it is advisable to reconsider your plan. Department of Telecom (DoT) is planning to block cell phones which do not bear the International Mobile Equipment Identity (IMEI) number. (Cheap Chinese phones do not have an IMEI number)

Sales of Chinese handsets constitute about 13 per cent (or Rs 4,000 crore) of the Rs 30,000-crore annual mobile handset market in the country. IMEI numbers can be checked by dialing “*#06#” in any keypad.

Source
Posted by AalsiPanda at 10:15 PM No comments: