Moving the innovation from the main product to a gallery of experimental features was a great idea for Gmail. The number of features increased rapidly without cluttering the product because you could select only the features that are useful to you. The downside was that most of the Gmail Labs were in an early phase, some were buggy and had to be temporarily disabled, while others were simply removed.

The first feature that graduated from Gmail Labs and became a standard feature is Google Tasks: you'll find it below the contacts link and this time there's no option to remove it. "The idea was always that the most popular and viable Labs features would graduate and be made more readily available to all users... and that some of the less used, less viable ones would disappear forever," explains Google.

Since Gmail Labs was a success, Google decided to create a similar gallery of experimental features for Google Calendar. "We've been looking for a way to release early features to users in a quick and experimental fashion, but in a way that would let developers and customers outside of Google extend Calendar too. We've seen how successful Gmail Labs has been and decided Calendar deserved Labs too," notes the Google Apps blog.

Google Calendar Labs has only 6 experiments: an option to customize the application using a background image, a clock that shows the current time in multiple time zones, an option that lets you jump to a certain date, a countdown to the next event, schedules for shared calendars and an option to attach Google Docs documents. 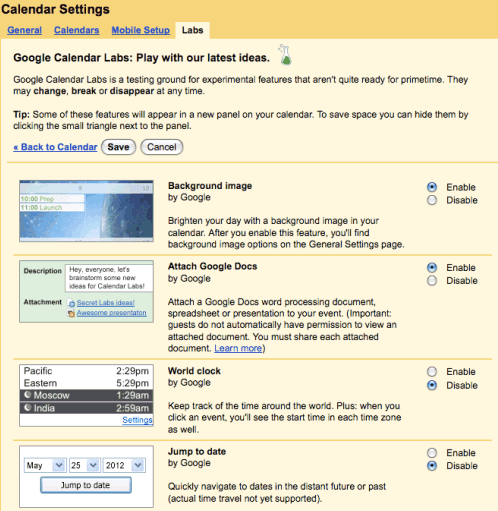 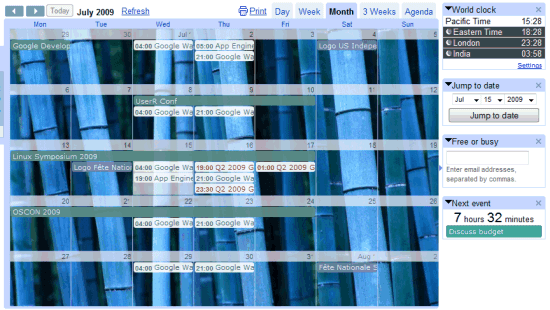 If the new features don't seem very useful, developers can write OpenSocial gadgets for Google Calendar. The APIs let you interact with Google Calendar's interface: you can add events, change settings, show the events for certain dates. Almost any iGoogle gadget can be added to Google Calendar using the following URL, assuming that you don't need to edit the preferences and that there's enough space to display it:

[SOURCE]
Posted by AalsiPanda at 8:14 PM