Recently we mentioned here how the word “buzz” turns out to be a reserved label in Gmail. Now, Gmail is rolling out a service by that name – Buzz – announced by Google some hours ago via video,blog post and help page. Buzz is meant to let you send messages and share status updates, photos, links and so on – think Friendfeed, Twitter or Facebook, but integrated in your email account.

Sharing something with your Gmail contacts, or publicly if you prefer, Google calls “posting a buzz”. You can also comment on, or Like the messages of others. And writing @ in front of a name directs your message to that person, as in Twitter (Twitter itself, by the way, is also integrated into Buzz). You can also send Buzz messages from your mobile phone. An API is available too.

According to CNet, Google’s Sergey Brin said that one of the most useful Buzz features for him is the ability “to start typing a thought right off the bat without having to worry about disrupting other people... I can throw something out there and the people who are most interested and most relevant tend to pay attention and reply.” Google’s recommendation system is supposed to surface the most relevant posts so that you’re “no longer acting as a human router of sorts but the back end does that heavy lifting.”

To try Buzz yourself, look for the left-hand navigation buzz link in Gmail. I don’t have it in my account yet so I wasn’t able to test it yet. “We’re still rolling out Buzz to everyone”, Google writes. 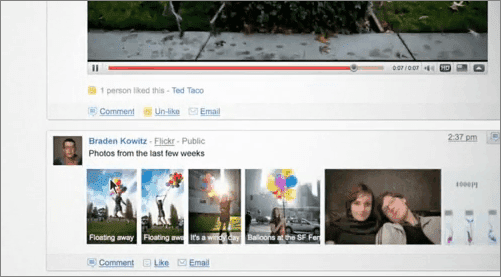 Friendfeed’s Paul Buchheit and Kevin Fox are not on Google’s paycheck anymore, but it looks like their work continues to be seen in Gmail. The screenshots here are from Google’s introductory video.

With all the features seemingly copied from other services, one starts to wonder if Google is on the road of stopping to invent new stuff and now merely cloning existing approaches and pushing it to their massive user base, thus battling competition. If Microsoft does similar GUI copying, aren’t they badmouthed for decades to come?

Then again, why should Google not go with time and utilize how the web evolved? If certain interface or communication approaches turn out to make sense, why not have them be spread widely, pushing forward the web’s progress? Also, I’m sure that the likes of Friendfeed and Twitter, in turn, got inspired by a whole lot of interfaces that were available to them when they brainstormed their GUI. And perhaps this whole thing should have been within email to begin with for ultimate casualness and mainstream adoption?

I guess we’ll find out what the answer was if in another 5 years, services like Twitter or Friendfeed ceased to exist. Another option, who knows, may be that the whole Buzz thing is just adding clutter and confusion to your inbox (where Buzz conversations may appear, too), not connecting the right contacts with whom you’d want to discuss news (I email with my family but may not want to talk to them about the latest developments from Silicon Valley), and blurring the lines between what’s private and what’s public, causing privacy mishaps and email paranoia.

[SOURCE]
Posted by AalsiPanda at 5:27 AM