There's a new flavor of Google Talk: the Labs edition, a desktop client that looks very similar to the Google Talk gadget and has most of its features. The application doesn't support voice chat or file transfer, but it has some new features: it lets you launch Google Calendar and Orkut, while including notifications for Google Calendar events and Orkut scraps. The new Google Talk uses WebKit to render some parts of the interface.

I don't find too many reasons why someone would switch from the full-featured client to the Labs edition: group chats, smilies, tabs, while the missing features are more important. A better decisions would have been to integrate these new features in the desktop client, instead of releasing a separate application. Now we have four different flavors of Google Talk: the original client, Gmail Chat, the gadget and the Labs edition. 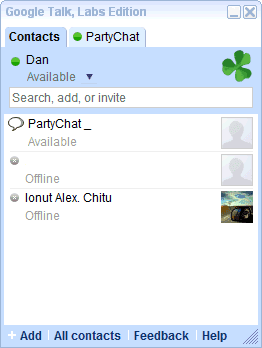 [source]
Posted by AalsiPanda at 8:37 PM