Google Talk, Not Dead After All

14 months ago, when Google added Vista support for its instant messaging client, nobody anticipated a long period with no updates. According to a Google engineer, the desktop client hasn't been abandoned and we should expect a completely new version of Google Talk. While I couldn't find when it will be released or the new features, it's reassuring to hear that Google is still working on GTalk.

Some of the most popular features requested by users are already available in the online interfaces: group chats, invisible mode, AIM integration, so we should expect to find them in a new release of Google Talk. Other features are already standard in other IM clients: video conferencing, conference calls, phone calls.

Last year, a presentation for Google Apps inadvertently included a screenshot of Google Talk enhanced with the ability to make phone calls. In the comments, someone informed us that "internally at Google, this feature is already active since long". 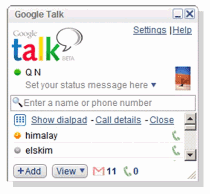 Posted by AalsiPanda at 8:09 PM