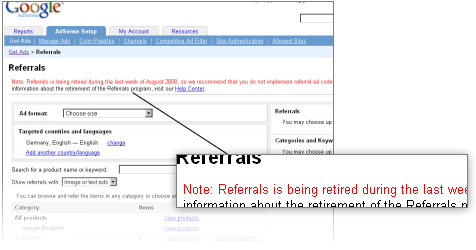 Google just announced they are ending their AdSense referrals program. In the past – and until August 2008 when this will officially stop – AdSense referrals allowed you as a webmaster to include links from different kinds of products; health, real estate, shopping, computers, travel, Google-suggested products like Firefox or the Google Pack download, and many more. When a user to your site bought something via that link, you’d get a commission of the sale. But now the AdSense page shows a red warning with a link to the help center covering the subject. Also, the following mail was sent to publishers:

We’re writing to let you know that we will be retiring the AdSense Referrals program during the last week of August. We appreciate your patience during this transition and here are some alternative options to consider:

If you currently use referral ads, either to promote Google products or offerings from AdWords advertisers, AdSense Referrals code will no longer display ads beginning the last week of August. We encourage you to take the following steps before the product is retired:

* Remove the referral code from your site(s): Please take a moment to remove all referral code from your sites before the last week of August, so you can continue to effectively monetize your ad space.
* Run and save all referrals reports on your desktop: Create and save all reports related to the referrals program on your desktop, so you continue to have access to your valuable campaign information

As usual Google is rather quiet about their real reasonings for ending this service, and the little they say on it may be taken with a grain of salt. Here is their explanation:

Why is this happening?
We’re constantly looking for ways to improve AdSense by developing and supporting features which drive the best monetization results for our publishers. Sometimes, this requires retiring existing features so we can focus our efforts on the ones that will be most effective in the long term. For this reason, we will be retiring the AdSense Referrals program.

[source]
Posted by AalsiPanda at 9:24 PM