Google just released Lively, a 3D world where you can chat with others and create your own rooms. Traces of this program appeared back in 2007 under the name of My World (this project also received the rumor nickname Google metaverse; TomHTML, Tony and I also lately saw traces of something called Google Rooms, though we aren’t 100% sure it’s related). After installing the desktop setup for Windows – yes, this is one of the rare Google products which isn’t completely browser-based – you’ll be forwarded to lively.com again. There, you can pick from a number of available rooms, and sign-in with your Google account.

I experienced a couple of problems with this service right now; from odd user name restrictions (I ended up re-selecting my Google ID name, even though they asked me to pick a new name at first), to very slow loading (I mostly saw skeletons at first), to finally, a program crash (the message “Lively has encountered a problem and an error report has been sent” appeared and the program closed). These may be launch problems, though, and nothing permanent... we’ll see.

Once you logged into a room, you can start customizing your avatar. First you can pick from a base type – like male, female or animal – and then you can fine-tune your hair, skin color, eyes and more. You’ll then see yourself surrounded by other avatars, and there’s background music and lots of laughing, grunting and other noises. The graphic has a lighthearted cartoon touch, reminiscent of something like a Lucasarts 3D game. When you talk by using the chat box at the bottom, your words appear as speech bubble above your character. 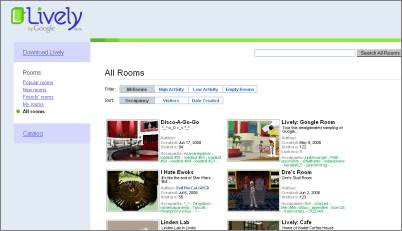 Selecting a room from the Lively site 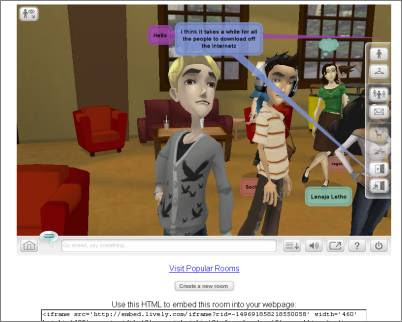