One of the most interesting announcements at today’s Google Searchology event was Google Squared, which Google says will be appearing in their Labs later this month (apparently at www.google.com/squared).

Google’s Matt Cutts at his blog wraps up the Squared demo:

If you typed in ’small dogs’ then Google would try to return types of small dogs, along with facts like how much they weigh. It’s easy to add a row to the Square, so you could add a row for Lhasa Apso and Google will try to infer the relevant facts from the web. You can also add new columns, e.g. if you type ’energy level’ then Google will look for corroborating facts across the web and try to guess the energy level of each type of dog.”

Here are screenshots, courtesy of Google (Google says as this is not public yet, the final release may change): 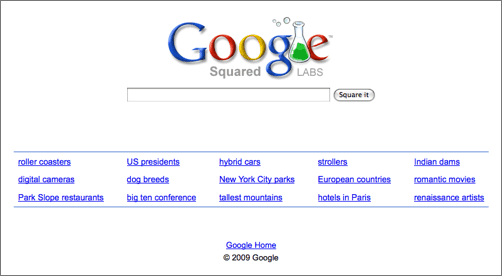 The Google Squared homepage, complete with a Labs icon, offers a search box and a “Square it” button. Suggested searches include “roller coasters”, “strollers”, and “hotels in Paris”. 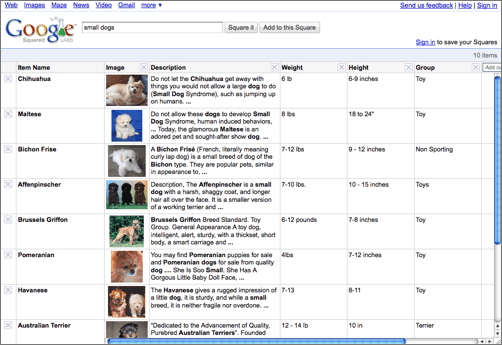 The search result page for the query “small dogs”. According to Google, Chihuahuas weigh 6 lb and belong to the group “toy”.

Posted by AalsiPanda at 2:59 PM

[...] Google recently announced they’d soon be launching their Google Squared service, this wasn’t what we had in [...]